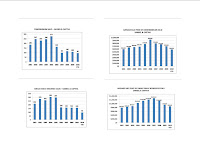 Number of Closed Sales. For both homes and condos, the peak in the number of sales was reached in 2004/2005. In 2006, the number of sales dropped precipitously by about 42%. Since that time, the number of sales has remained fairly steady. However, we do note that the number of home sales in 2010 should be about equal to 2009 (and the three previous years), since we're about 7.5 months into the year and the seasonal sales are behind us. However, condo sales seem to have picked up quite a bit. We are in mid-August, 2010, and we are only 8 sales short of 2009 sales. As you can see, condo sales over the past four years dropped further than the single family home sales, so we needed this portion of our market to make a rebound - of sorts.

Average Sale Prices. The average sale price of SF homes continued to surge upward into 2007, even though the number of sales had slowed in 2006. The same is true for condominiums, with average sales price rising through 2006, even though the number of sales had dropped, starting in that year. When we look at the rise and fall of the average sale prices, it shows that for single family homes, the increases from 2001 through 2007 were at an average of 10.6% per year. For the three years since, the average price declines were at an average of 11% per year - almost exactly the same rate. No precipitous rise or fall, which we feel speaks strongly of the Sanibel/Captiva market. On the condominium side, the average rise in sales price was 11.4% per year and the average decline was 9.4%. Again, no precipitous rise or fall in these average sales prices.
To see everything thats for sale on Sanibel and Captiva please visit my website at http://www.sanibelhomeseeker.com/

Posted by Sanibel Island News at 8:34 AM No comments:

Kathy Carik
07/29/2010 09:28 am
Today Sanibel City Manager Judie Zimomra announced that the City has received the 20th single-family home permit application for the current Fiscal Year, which started October 1, 2009.
In comparison, for the entire Fiscal Year of 2005, 16 single family home permits were issued on Sanibel; in 2006, 19 single family home permits were issued for the entire year; in Fiscal Year 2007, 17 single family homes were constructed; and in 2008, 11 permits were issued for new single family homes on Sanibel Island.
Upon releasing the statistics, Zimomra stated, "As a community Sanibel offers an excellent quality of life to our residents. As our City continues to reach build-out the remaining lots on the Island are very desirable, perhaps even more so during the current economic climate. We are especially pleased that our new construction is not confined to a single neighborhood but is occurring Island-wide.”
For information on property for sale in Sanibel or Captiva please see my website at www.SanibelHomeseeker.com
Posted by Sanibel Island News at 7:07 AM No comments: