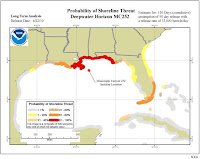 Updated Oil Spill Map: Miami and South Florida Could Get Hit, But Less Than 1% Chance It Will Hit Southwest Florida

The National Oceanic and Atmospheric Administration (NOAA) has updated its map of where the BP Gulf oil spill may be heading. It appears the crude has almost NO chance of reaching the coast of Lee County. But it is expected to affect much more distant areas of Florida, including the Florida Keys and Miami, according to computer model projections. Albeit less than (<) 1% probability of hitting southwest Florida along the Lee and Collier coastlines, the same NOAA forecast from Friday, July 1 shows a 61% to 80% chance of sheen, tar balls or other oil remnants coming within 20 miles of Florida's east coast, from the Keys north to the Fort Lauderdale area, by Aug. 18, the Associated Press reported. See the NOAA Threat Map below. Unfortunately, other much more distant areas of Florida, including the Florida Panhandle, have already seen beaches littered with tar balls. The agency predicts a low probability of "oiling," for these areas. We in Lee County have sympathy and great concern for our fellow Floridians who have not been so lucky. Most parts of southwest Florida, fortunately, will have less than (<) a 1% chance of oil impact, NOAA said.
Posted by Sanibel Island News at 1:06 PM